While our time visiting the Walt Disney World (WDW) parks was over, we still had a half-day at the resort and then the flight home.  As I stated before, I wish I had planned for a day in the middle of our vacation to just enjoy the resort, so we spent the last day at WDW trying to squeeze in as much fun as possible.  While tired yet happy, we just did not want our vacation to end until we arrived back at our house.

First off, they did not want to leave the resort.  In fact, although I told her about a hundred times, Elaina still kept asking if we were going back to the Magic Kingdom that day.  I hated to disappoint her (again), but at some point she had to understand that we could not live at WDW… yet.

Just like on Day Three, the girls were very happy to be able to sleep in on the last day at WDW.  They finally got a chance to watch cartoons all morning, after of course making a giant fort using all the blankets and pillows in the room (pretty certain my exact quote was “Well, I’m not the one cleaning it up afterwards, so, yeah, sure”).  They had a pretty good morning relaxing, but were also anxious to participate in some of the resort activities that I had been pushing back from earlier in the week.

Before we really started our day though, Elaina and Gabriella had to finish something that they had been putting off since Day One.  Because communication was going to be a little sporadic during the week (we were so busy and the girls were always tired in the evenings), I promised their mother that I would send her a constant stream of pictures and that the girls would write her a postcard every day.  While she got more pictures than she probably wanted, the girls just did not want to finish the postcards.  On our last day though, they both had to sit down and complete them before we left the room.  While they did not enjoy it, their mother certainly did when she received them in the mail.  So for Tip #1, try to send as many pictures as possible (of preferably just the kids) to their mother so that she can still see her babies and get them to participate in activities with mom (such as the postcards) that they can all talk about when they get back that does not necessarily have to do with me.  Their mother really appreciated it, and at least when they discussed it, it became about Elaina and Gabriella’s vacation as opposed to the Calkins family vacation.

But before those activities could start though, the girls needed to eat.  And of course, Elaina wanted to get another bowl of spaghetti, while Gabriella settled for some apples and bread sticks.  I was just happy that they were not fighting me to get more ice cream or candy.  It was a good start to transitioning from the vacation junk food to eating healthy food again every meal, with dessert being a reward and not a given.  Which brings us to Tip #2:  At some point, you are going to have to begin transitioning your children from vacation mode back to their normal routine; meals and healthy snacks are a great way to start showing that things are going back to normal.

While unfortunately the caricature booth was closed until later that evening, the Surrey Bikes were open and the girls really wanted to go on them.  Being very concerned about the sign that highly recommends that two people pedal the bike, I asked the cast member.  She says that I should be fine, but will likely only be able to do about two laps in the thirty minute time frame.  Which of course meant that I was going to try for three laps.  I succeeded, but it was a lot more tiring than I was expecting.  But, like so many other things in my life, I have got to make the girls happy, especially on their vacation.  For those that end up going to WDW, I highly recommend the Surrey Bikes (especially if there are two people to pedal!).

The girls then played a lot of cornhole in front of the resort, with a whole audience of people that were waiting for their bus.  And you know the girls love an audience.  They absolutely loved it, so I will put a cornhole set on their Christmas list.  A few more snacks purchased from the general store, a few more pennies pressed, and a few more pictures taken, we were ready to check out of our hotel room and take the Magical Express back to the airport.

While I did not have the normal flight amenities ready for them on the return trip (coloring/activity books, crayons, etc.), I did have plenty of snacks.  They did not need any of that though, as all three of us were fast asleep before takeoff.  It took a little longer on the second flight, meaning that we actually got in the air before all passing out.

Needless to say, we were all pretty tired.  Which I took as a good sign that we did not waste any time at WDW, enjoying it all the way to the end.  Unfortunately, Elaina had left the light on in the back seat before we left, so my car battery was dead when we arrived back at the vehicle.  Thankfully, as upset as I was that I had to wait out in the rain while a service agent came to give us a jump (Sky Harbor Airport has amazing car service), I told the girls, while repeating it to myself, “Do not worry one bit.  This is not going to ruin our vacation.”  The girls were happy, playing on their iPad and Amazon Fire tablet in the dry car, while Dad got soaked out in the rain.  The things we do to keep our kids happy.  After an uneventful car ride home, at last, we were home.

So for single parents, I highly recommend considering Walt Disney World for your vacation.  Not only is it a place where your kids will actually want to go (and let us just be honest, adults want to go there too), but it is extremely convenient if you stay at one of the WDW resorts.  With the Magical Express, you not only do not need to rent a car, but you also do not have to bring car seats.  They also take your luggage right to your room, so just getting to the resort is hassle-free, allowing you to start enjoying your vacation immediately.  The park hoppers allow you to enjoy each park at your children’s’ pace, knowing that you can always either come back to a park or skip parts of it for something better.  They also have everything that you need right there on the resort, including a store, restaurants, swimming areas, and playgrounds.  I guarantee that your family will not be disappointed.

So when I had some downtime (i.e. while I had two kids sleeping on me during the nightly bus rides back to the resort), I would make some memes and send them to my mother, attempting to add some comedy to our trip memories.  Below are some of the best ones (which were coincidentally the ones that were safe for work). 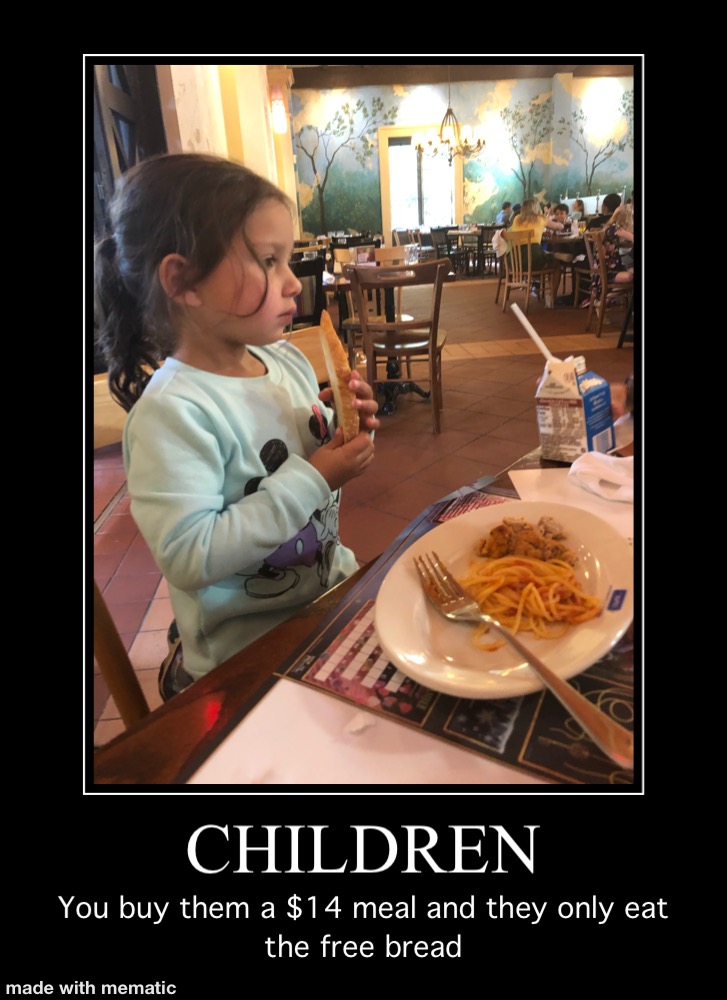 Thanks again for checking up on us and I hope you enjoyed hearing about our vacation at Walt Disney World.  Next week the girls will be visiting their mother in Texas, so I will have to make a few posts to keep my mind off of how much I miss them.  Cheers!

Published by Robert A. Calkins

I am a 40-year old single father to two wonderful daughters, Elaina (7) and Gabriella (5), and an Army Officer stationed at Fort Huachuca, AZ. When we are not at home tending to dress-up and tea parties, we are off hiking in canyons, learning in children's museums, zoos, and aquariums, or fishing at the lake. View all posts by Robert A. Calkins